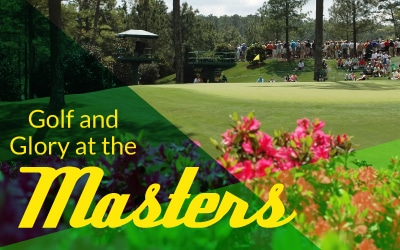 One of the grandest traditions in sports is an annual rite of spring here in Georgia. In early April, the world’s elite golfers travel to Augusta National Golf Club to determine who will claim the title of champion at the Masters Tournament.

But the players aren’t the only stars in this show.

The 86th Masters Tournament is April 7–10

When the eyes of the golf world turn to Augusta, they’re often focused on the spectacular natural beauty of the famous golf course. The Georgia gem, which opened in 1933, is legendary for its blooming azaleas, pristine greens and breathtaking vistas.

It’s no exaggeration to say the landscaping at Augusta National is a big deal. Golf fans take their Masters view very seriously. Evidence of that fact: A January 2022 announcement of the club’s intent to hire a landscape architect made national sports headlines. One reporter described the position as “the most pressure-packed golf gig we can think of.”

The emphasis on beauty as well as bunkers is

evident across the 365 acres of grounds.

The emphasis on beauty as well as bunkers has been evident ever since Georgia native and legendary amateur golfer Bobby Jones conceived the idea of locating a championship-caliber course in the state. He found the right spot in 1931 — a 365-acre piece of land near Augusta that was an indigo plantation in the early 1800s and then a plant nursery for more than 50 years. Jones declared the location as “perfect,” adding, “and to think this ground has been lying here all these years waiting for someone to come along and lay a golf course upon it.”

Augusta National annually morphs into Shangri-La thanks to the year-round work of a dedicated grounds crew and greenskeepers. Before the pros tee off for the 2022 edition of the tournament, Walton Gas shares these facts about the magnificent natural environment where the contest will play out.

The 13th hole is adorned with more than 1,000 azalea shrubs.

Augusta National Golf Club opened in 1933 and began hosting the Masters a year later. With the exception of a three-year hiatus during World War II, the club has welcomed players and guests for the premier sporting event every year since.

Whether you are among the lucky few who get to see it in person or watch it on TV, the Masters — and its Mother Nature co-star — is a rite of spring not to be missed.