Benefits of Cooking with Natural Gas 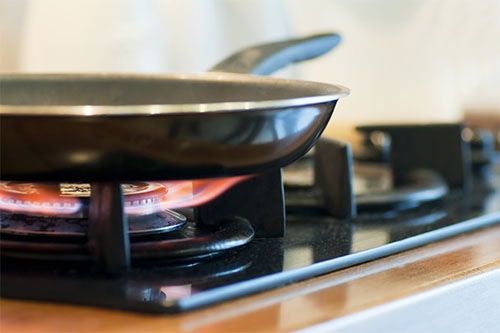 One of the most versatile and valuable of all energy resources is natural gas. From heating and electric to fertilizers and clean transportation, natural gas can be used in numerous ways. Chefs and cooks are particularly fond of the energy source in their range cooktops. There are many benefits to cooking with natural gas stoves rather than electric stoves.

Why You Should be Cooking with Natural Gas

Control is obviously an important aspect of cooking.  Something that is too hot or too cold or on the stove for too long or too short can mean the difference between a delicious entrée and a tasteless disaster. Fortunately, cooking on gas stoves makes heat much more controllable. Natural gas stoves change heat immediately and precisely, whereas the heat change is gradual on an electric. The gas stove heats up faster as well.

Choosing to cook with natural gas is also a safer alternative because gas stoves create less heat than electric ones. Your kitchen and stovetop will be cooler, making you less subject to accidental burns. Fortunately, the food will still keep the higher temperatures and will cook just as fast.

In the past igniting a gas stove was a burden and could often be dangerous because a match would be used to light the pilot light. However, modern gas cooking stoves have electronic ignitions which require far less work and are hazard-free. Additionally, without a constantly burning pilot light, there are neither fumes nor gas waste.

Lastly, natural gas range cooktops can be advantageous in a power outage. You would not be able to cook on an electric range if the power goes out, but if you have enough natural gas or propane, cooking in the dark will be no problem.

Overall, natural gas cooking is valuable due to its speed, control, safety and dependability. Whether you are a professional chef or a cook at home, choosing gas over electric has proven to be the most effective means of meal making.