Bring on the Braves 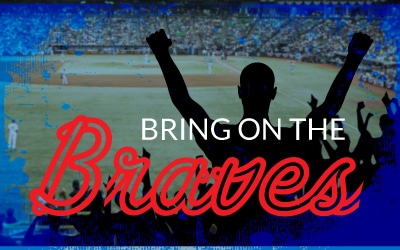 Can you feel it? Ever since the championship celebration concluded last November, the momentum around Braves Country has been rebuilding.

Despite the ongoing lockout that has already delayed spring training, loyal fans are counting the days until the umpire commands “Play ball!” We can’t wait for professional baseball’s reigning world champions to return to home field play at Truist Park.

Yes, bring on the Braves, our very own Cinderella team whose surprising 2021 postseason run secured their first World Series title since 1995. A new season — whenever that gets underway — of possibilities awaits.

The Braves are scheduled to host their home opener

at Truist Park on April 7.

As of this writing, the Bravos are still scheduled to host their home opener on Thursday, April 7, against the Cincinnati Reds. First pitch is at 7:20 p.m.

Ticket holders will get a chance to once again celebrate last year’s championship along with enjoying the normal ballpark fun. Count on mascot Blooper, Hammerin’ Hank and the Home Depot tools, the Heavy Hitters drumline and the always-hyped Tomahawk Team to welcome fans back with plenty of between-inning entertainment.

On the diamond, the celebrating will be brief because the Braves will be getting back to business and focusing on a new goal. They’ll attempt to make history by becoming Major League Baseball’s first repeat world champions in 22 years.

Check out our fun ideas for counting down the days

until the 2022 regular season begins.

Can’t wait until the season begins to get your chop on? The customer service team at Walton Gas has compiled a list of ways you can spend the remaining days before it’s time to head back to the ballpark.

We can hardly wait for baseball season to officially arrive. Go Braves!