Caring for the Kids 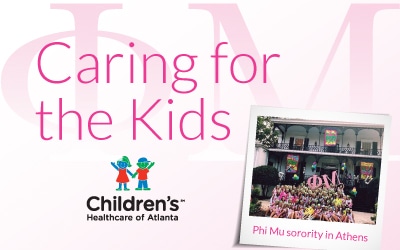 Appearances can be deceiving. Take the house at 250 South Milledge Avenue in Athens, for example.

With its wrought iron accents and sweeping stairways, the Greek Revival residence sitting on the edge of the University of Georgia (UGA) campus seems to represent the past rather than the future. And it could easily be assumed that the young women seen coming and going through its doors have only fun on their mind.

Don’t let the looks fool you, though. Some important things are happening at the grand home, also known as the Phi Mu sorority house. The women here are on a serious mission to create a healthy future for some of Georgia’s seriously ill children. For them, back to school means it’s also time to roll up their sleeves and get to work to benefit Children’s Healthcare of Atlanta (CHOA).

The members of Phi Mu are among the thousands of students heading back to college campuses all across the state this month. Walton Gas is going along with many of them. Natural gas heats water, warms living spaces and cooks food for students attending schools like Georgia Tech and the University of Georgia.

“We use gas for everything in our house,” she said.  The mansion is home to 68 members of Phi Mu, which holds the distinction of being UGA’s first sorority.

Designated as a historic landmark in 1991, the house was built in 1858 for Thomas Napier Hamilton, who is said to have been Georgia’s first millionaire. It became Phi Mu’s home in 1964.

The house’s grand appearance prompted Architectural Digest to call it one of the 10 “most gorgeous sorority houses in America.” Southern Living has also taken notice, naming it among the 15 most beautiful houses located on college campuses in the South.

The bond between Phi Mu and Walton Gas extends beyond natural gas consumer and supplier, however. Both are actively involved in giving back to the community by supporting CHOA, one of the five Children’s Miracle Network Hospitals in Georgia. The national network of pediatric hospitals has been Phi Mu’s primary charitable focus since 1986.

The sorority’s more than 300 active members at UGA spend the school year raising funds and awareness for the local pediatric hospital, said Caroline Marsden, Phi Mu’s philanthropy chair and a sophomore majoring in marketing. To provide the best care for young patients, the hospital relies on donations and community support, as Medicaid and insurance programs do not fully cover the cost of care. Fundraising partners like Phi Mu and Walton Gas help to fill the funding gap.

In the fall and spring, the sorority hosts a Meal on the Lawn event to benefit the hospital. Ticket buyers enjoy a homemade dinner and live entertainment on the front lawn of the Phi Mu house.

Members also use social media to individually collect donations for the hospital.

“Each member of the chapter has their own fundraising page where they can direct donors to learn more about where their money goes and include their personal experiences,” Marsden said.

To keep the “fun” in fundraising, the sorority’s members also play an active role in UGA’s Dance Marathon. It’s the largest student-led fundraiser at UGA. Proceeds from the 24-hour event benefit CHOA.

“Every March, our entire chapter attends the event that’s full of dancing, food, games, fundraising pushes and listening to the stories of families we support,” said Marsden.

Phi Mu’s commitment has yielded impressive results. Before COVID shutdowns in 2020, the sorority raised more than $206,000 for Children’s Miracle Network Hospitals. The UGA students were recognized as the nation’s top fundraiser among all Phi Mu chapters.

Caring for the kids doesn’t end with fundraising. In a typical year, chapter members frequently travel to Atlanta to spend one-on-one time with young patients and their families.

The relationships built during these visits are mutually beneficial, said Marsden. She cites her own experience as evidence. During last year’s shutdowns, she spent virtual time with patients, engaging with them while playing games and conducting cooking classes.

“Getting to know the kids has truly impacted my life for the better,” she said. “They have taught me so much.”