How Natural Gas is Stored 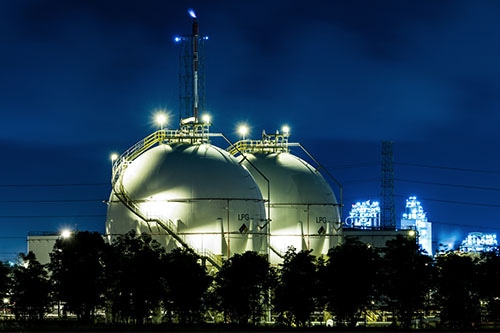 Just like any other resource that helps provide heat and electricity, demand for natural gas goes up and down with the seasons. In hot regions, powering air conditioning during the summer months requires more gas for electricity; in cold regions, gas is a valuable resource during the winter when it can be used for heating, for generating electricity during long, dark nights, and for cooking hot food. Seasonal demand means that there are often large fluctuations in how much natural gas is needed, but fluctuating the production to match is expensive and inefficient, so storing the excess natural gas during periods of low demand means that there’s plenty to go around during periods of high demand.

Most natural gas is stored underground – in fact, most natural gas is stored in the same places from which it is extracted. The kinds of porous rock that yield natural gas in the first place are pretty good places to keep natural gas when it isn’t being used, so depleted underground reservoirs are treated and then re-injected with the natural gas produced by other methods. As gas is added, the pressure inside the reservoir builds up; the higher the pressure, the easier the gas is to extract again. Some of these reservoirs are salt cavern reservoirs, which make particularly good storage for natural gas because the salt is self-sealing, meaning that very little gas escapes and is wasted once it has been injected into the reservoir. Salt cavern reservoirs’ structure makes them extremely strong and environmentally sound; some of the biggest reservoirs extend further underground than the height of the world’s tallest skyscrapers!

If extremely high volumes of gas need to be stored, natural gas can be cooled into a liquid. Liquid natural gas is much denser than in its gaseous form, so large amounts of gas can be stored in relatively small spaces with a high energy yield. Natural gas reservoirs can be found all over the country, but most are concentrated in the north-east, where the geological landscape is perfectly suited to store large amounts of gas without harming the environment.