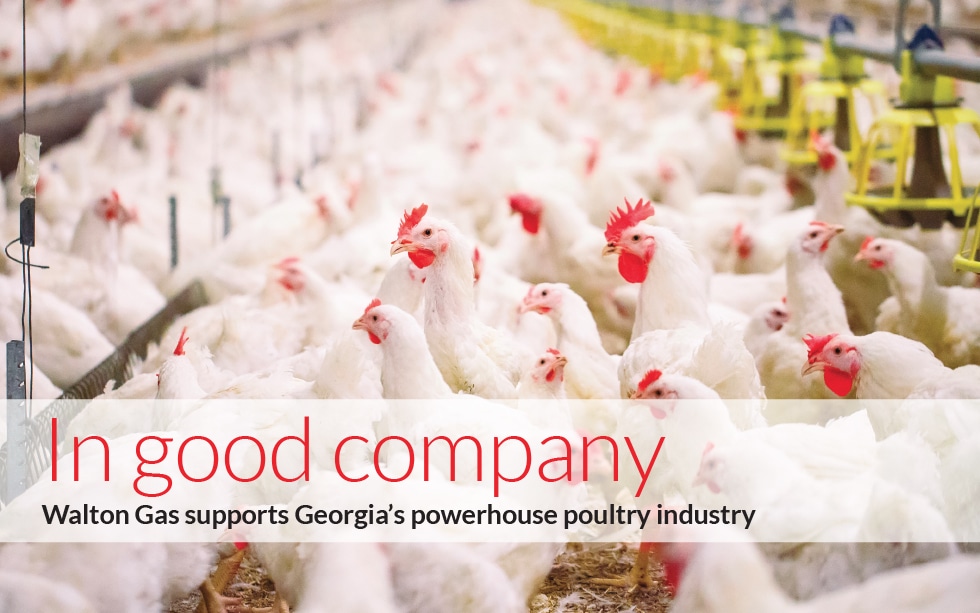 “Zacchaeus climbed a sycamore tree to be closer to God, and this farm helps me do the same,” the Walton Gas customer said, recalling the biblical story that inspires his daily agricultural endeavors.

Hayes and his family have been raising broilers — chickens whose meat is desirable for roasting, grilling or barbecuing — for the last seven years. In five 500-foot houses, the family raises nearly 650,000 chickens annually as a contract grower for meat-processing giant Pilgrim’s Pride.

Being involved in the state’s poultry industry puts Hayes in some good company. Nearly 7,000 Georgians work directly in poultry and egg production. Another 33,000 earn paychecks in the poultry processing industry. Overall, the industry directly and indirectly supports 170,000 Georgia jobs and annually contributes $41.8 billion to the state’s economy, according to the Georgia Poultry Federation.

The University of Georgia Center for Agribusiness and Economic Development’s AgSnapshots 2020 indicates broiler producers like Hayes contribute to the state’s top commodity. Broiler production accounts for the lion’s share of the state’s annual ag receipts, hauling in an impressive $4.5 billion, or more than 32 percent. Broilers and eggs are Georgia’s two largest agricultural commodities, making up 41.5 percent of the state’s production value.

On an average day, Georgia produces 31 million pounds of chicken — about 3 pounds for every person living in the state.

Even more impressive is Georgia’s position as the nation’s leader in broiler production, according to the latest numbers compiled by the National Agricultural Statistics Service. In fact, the Peach State’s production numbers have put it atop the rankings for decades. On an average day, Georgia produces 31 million pounds of chicken, the equivalent of about 3 pounds for every person living in the state.

Reliable, affordable heat, such as what he gets from Walton Gas, is essential for broiler production, said Hayes.

“I get birds within hours of them being hatched,” he explained. “I maintain a constant 93 degrees in my houses for the comfort and health of the birds.”

Hayes typically raises six flocks per year. Each flock remains in his houses from 37 to 42 days while reaching the target weight of 4.3 pounds.

Gas heat also plays a key role in cleaning the houses between flocks. Flooding the vacant houses with high heat is one of the biosecurity measures Hayes uses to ensure the next flock of chicks enters a sanitized space. Houses are heated to 100 degrees for 72 consecutive hours to destroy any lingering bacteria following standard cleaning practices.

A search for a locally headquartered gas supplier that could offer a higher standard of customer service led Hayes to make the switch to Walton Gas a few years ago.

“I like that Walton Gas is customer-focused. Plus, I get a better rate,” he added. “The pricing and customer service are excellent.”

“We’re proud to be the natural gas company many of Georgia’s broiler and egg producers — as well as hatcheries and processing facilities — rely on,” she said. “Daily, we’re dedicated to maintaining their loyalty and trust while playing an essential role in this important industry.”