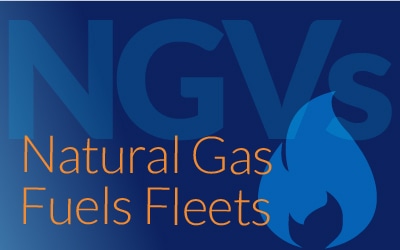 You and the driver of the UPS truck that just rolled up in your driveway may have more in common than you think.

Sure, you’re both interested in that package being unloaded from the big, brown truck. But closer examination of that delivery vehicle may reveal another link. Do you see it? Printed just below the company’s familiar logo is the statement “Low Emission Natural Gas Vehicle.”

UPS is just one of the Georgia corporate and public entities that have switched from petroleum to compressed natural gas to fuel heavy- and medium-duty vehicles. Operating natural gas vehicles — NGVs, for short — reduces vehicle emissions that contribute to poor air quality.

Compressed natural gas is attractive for commercial fleets because it is cleaner and safer than traditional fuels.

Compressed natural gas (CNG) is attractive for commercial fleets because it is cleaner and safer than traditional fuels. It’s also typically less expensive.

CNG vehicles produce up to 90 percent fewer emissions than gasoline or diesel, and they reduce greenhouse gases 15 to 20 percent over diesel and gasoline, according to statistics provided by AGL. The environmental benefit is even more significant if the CNG is sourced from renewable natural gas suppliers like landfills, water treatment plants or agricultural waste digesters. The reduction in greenhouse gases is typically in the 80 to 90 percent range or can even be carbon negative, depending on the source.

There are more than 175,000 natural gas vehicles on U.S. roads today, just a fraction of the 23 million found worldwide, according to NGV America, which promotes increased adoption of NGVs. Fleets can order a natural gas version of most commercial vehicles manufactured in the U.S., including pickup trucks and vans, refuse trucks, transit buses and short-haul freight trucks.

The number of natural gas-fueled vehicles has been climbing in Georgia since the 1990s.

The number of natural gas-fueled vehicles has been climbing in Georgia since the 1990s. UPS operates about 600 NGVs statewide. MARTA, Atlanta’s mass transit system, has about 375 NGV buses. Officials in DeKalb County recently announced that, for the first time, natural gas topped diesel as the primary fuel for their vehicles.

Fleet managers representing a variety of transportation applications are exploring the possibility of converting their fleets to compressed natural gas, Skelton observed.

“Interest in CNG vehicles remains strong,” he said. “Now I’m seeing companies of all sizes — not just the biggest ones — taking a look at this option that can align with their sustainability goals.”

Skelton is also the board chair for Clean Cities–Georgia, a local initiative supported by the U.S. Department of Energy (DOE) that focuses on strategies to reduce petroleum consumption in transportation. The organization has been one of the driving forces behind establishing more public CNG refueling stations throughout the state.

Six of the public-access fueling stations were the result of a project partially funded by a DOE grant and administered by Clean Cities–Georgia, said Frank Morris, executive director. The organization also participated in another recent grant program that helped pay for more than 125 new medium- and heavy-duty CNG vehicles deployed by fleets in the state.

New developments in engine and vehicle technology, more stringent air quality regulations and government incentives are making NGVs an increasingly attractive choice for fleets of all different sizes and descriptions. Skelton encourages any fleet manager interested in making a fuel change to talk with him about options and opportunities. Walton Gas can provide service for any CNG fueling station along AGL lines. Skelton can be reached at iskelton@southernco.com.