Natural Gas History and Use 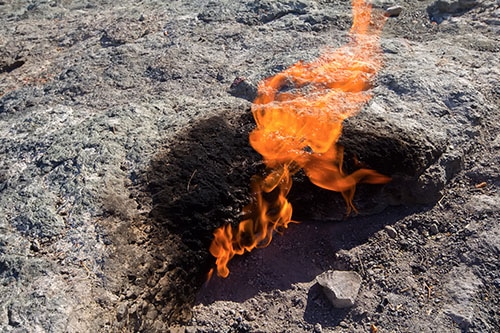 Natural gas has been around for millions of years. Although it hasn’t been used for energy until fairly recently, its existence was always known although not necessarily understood.

Natural gas first came to light as blazing fires underneath of the earth’s crust which puzzled ancient civilizations. One of the most famous natural gas fires can be traced back to ancient Greece in 1000 B.C. On Mount Parnassus, a livestock herdsman discovered flames rising from cracks in the rock. The Greeks then believed this to be a sign from the gods and built a temple around the flame.

In approximately 1785, Great Britain became the first country to use natural gas for commercial purposes. This natural gas was created from coal and used to light houses and streetlamps. New England tried to utilize natural gas for similar purposes around the same time, but this manufactured gas was much less efficient than the type that comes from underground.

It was not until 1859 when Colonel Edwin Drake was digging a well around Lake Erie and struck both oil and natural gas that the natural gas industry really took off in America. From Drake’s well, a pipeline was constructed, running over five miles to Titusville, Pennsylvania. The construction of this particular pipeline was pivotal because it proved that natural gas could be transported securely and efficiently from its underground source and used for everyday purposes.