Pancakes With a Side of Patriotism 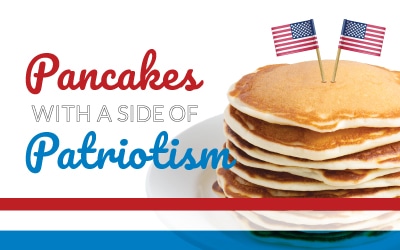 It seems fitting that the American flag flies daily near the entrance of the White House Restaurant in Atlanta’s Buckhead district. The iconic diner both shares a name with the U.S. president’s residence and is a shining symbol of the American dream come true.

“My grandfather came here from Greece in 1966 with $50 in his pocket, and he created this business that has endured for 48 years.”

“My grandfather came here from Greece in 1966 with $50 in his pocket, and he created this business that has endured for 48 years,” said Dylan Galaktiadis, the third of four generations who have worked at the restaurant.

Demos Galaktiadis was in his mid 20s when he immigrated to the U.S. from the Greek island of Icaria. In just five years, he and wife Eva became owners of their own American business, the White House Restaurant.

Opened in 1948, the restaurant was named for its original location in a house painted white inside and out, Demos recalled. The Galaktiadis family moved the restaurant to its Peachtree Plaza address in the late 1970s. The Walton Gas customer has been the go-to place for breakfast in the neighborhood ever since.

If the many American flags, campaign signs and political power broker conversations at the White House aren’t hints enough, the breakfast menu certainly leaves no doubt about the owners’ American pride.

about the owners’ American pride.

For starters, there’s the most popular morning item, the White House Breakfast featuring two eggs your way; ham, sausage or bacon; grits; hotcakes or French toast. Also popular is the Presidential Breakfast that comes with an 8-ounce ribeye steak instead of the traditional breakfast meat.

Another favorite is the Olympic Omelette, which Dylan’s father created when he worked at the diner as a young man. With spinach, tomatoes, peppers, onions, mushrooms, feta and tzatziki (seasoned yogurt), it’s a nod to the family’s Greek heritage.

Being a great neighborhood restaurant is as much about the people as the food, said Dylan, who recently became the full-time manager. Understanding this fundamental has helped the White House enjoy long-term success.

“I’ve worked here since I was about 12. Our regular customers have watched me grow up,” she said, referring to a cadre of local lawyers, real estate professionals and financial advisors who routinely start their day with a White House breakfast. Her son, Chase, is now the fourth generation of the family to learn the business, beginning with bussing tables and washing dishes.

Under the watchful eye of her grandparents and a contingent of longtime employees, Dylan has learned the foodservice business. More importantly, she has witnessed the impact of the special brand of customer service maintained by the veteran staff.

“People come from all over just to see and interact with these familiar faces, just as much as they come for the home-cooked food.”

“We have nine employees who have more than 150 years combined experience working here,” she said. “People come from all over just to see and interact with these familiar faces, just as much as they come for the home-cooked food.”

As Dylan has taken on more responsibility, her grandparents have eased into a well-earned semi-retirement. But they’re never too far away from the staff and customers they consider to be family.

“They’re both still here a lot,” Dylan said. The two are frequently spotted in the restaurant chatting up the breakfast regulars as well as the many visitors.

These days, the regulars share space at the diner’s counter and in its pink leatherette booths with more tourists. Concierges from the area’s many large hotels send their guests to the White House “for a real diner experience.”

“There’s nothing like us in Buckhead,” Dylan said. “While others have reinvented themselves over the years, we’ve stayed true to who we are. We’re still the real, original thing.”

Hungry for a traditional diner breakfast? These Atlanta-area Walton Gas customers also serve up satisfying eggs-and-bacon fare to get your day going.

One of the oldest restaurants in Georgia also happens to have one great breakfast menu. This Atlanta landmark has been serving “Food That Pleases” since 1929. Whether you’re craving Southern-style biscuits smothered in gravy or lean more to lox and bagels, you’ll find it on this broad breakfast menu.

Breakfast is served all day, so you can enjoy eggs Benedict, Spanish omelettes, Belgian waffles and fresh pastries for any meal. The suburban diner is popular for its expansive menu, generous portions, use of fresh ingredients and a rotating selection of melt-in-your-mouth desserts.