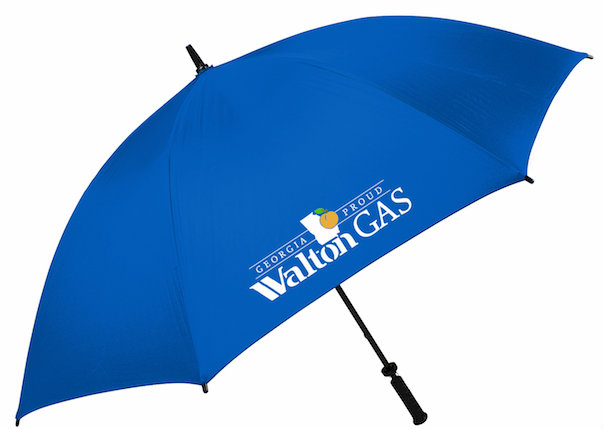 New and renewing Walton Gas customers receive a free umbrella as thanks. But it’s not just any umbrella. Sure, the bright blue exterior emblazoned with the Walton Gas logo may look like the average, water-repelling, rainy-day gear. But pop it open and you’ll find a delightful surprise: a photographic mural featuring five iconic scenes from around the Peach State.

The unusual umbrella has garnered raves from recipients as well as awards for its unusual design. Even better, the umbrella is a great conversation starter. The next time it’s raining, put up your Walton Gas umbrella and show your Georgia pride with these fun facts.

Mention the ironwork in Georgia’s oldest city and ornamental balconies and fences may first come to mind. Most don’t realize that Savannah’s best-known landmark, the iconic fountain in Forsyth Park, is also a work in iron. Built in 1858, the ornate, cast iron fountain is the park’s centerpiece. When the fountain was first turned on, citizens in attendance quickly found themselves soaked when water spouted from the four triton figures with too much vigor. A much larger basin had to be constructed to catch the spray. The fountain’s characteristic spray effect didn’t exist until 1873 when a recirculator was installed as a water conservation measure.

With 56 buildings rising at least 330 feet in height, Atlanta ranks seventh among U.S. skylines. Boasting a distinctive gold, glowing crown, the Bank of America Plaza on Peachtree Street is the tallest at 1,023 feet and 55 stories. Nine of the city’s 10 tallest buildings are on Peachtree Street; the exception is Buckhead’s Sovereign building on, appropriately, Peachtree Road. The Westin Peachtree Plaza (number 5 on the list) was the tallest hotel in the world when it was completed in 1976. Its 72 floors are the most of any building in the city.

Georgia’s oldest and tallest lighthouse is properly called the Tybee Island Light Station. In fact, though, there was no light in the first structure built in 1736 to guide mariners into the entrance of the Savannah River. At 90 feet tall, the day-mark (a lighthouse with no light) was the tallest structure of its kind in America at the time. After storms and an eroding beach destroyed two day-marks, a 100-foot tall brick and wood structure was constructed in 1773. It was lit with candles for the first time in 1791, making it a true lighthouse. The top 40 feet of the structure had to be rebuilt following the Civil War, but the remainder of today’s building dates back to the first true lighthouse.

Scientists believe the mountains in the state’s northeast corner — at the southern end of the Appalachian Trail — are over 1 billion years old. Visitors come by the thousands each year to enjoy the area’s rugged, natural beauty that includes Brasstown Bald. At 4,784 above sea level, it’s the tallest point in Georgia. A seasonal shuttle takes visitors to the top where they can view miles of the 750,000-acre Chattahoochee National Forest, as well as the Carolinas and Tennessee. The North Georgia mountains are also home to Amicola Falls, the largest cascading waterfall east of the Mississippi River.

Agriculture is the state’s oldest and largest industry. It has played a dominant role in Georgia’s economy since English colonists settled here in 1733. Today, agriculture contributes about $73 billion annually to the state’s economy, according to the UGA Center for Agribusiness & Economic Development. Georgia is perennially the number one state in the nation in the production of peanuts, broilers (chickens), pecans, blueberries and spring onions. At the last agricultural census, one in seven Georgians worked in agriculture, forestry or related fields. There were 42,257 farms in the state encompassing 9.6 million acres of land.

Get your Walton Gas Umbrella

Ready to show your Georgia pride on a rainy day? The Walton Gas umbrella is available only to new and renewing customers who lock in a 2-year low fixed rate. And here’s even better news: You’ll also receive a $25 bill credit. Sign up now!