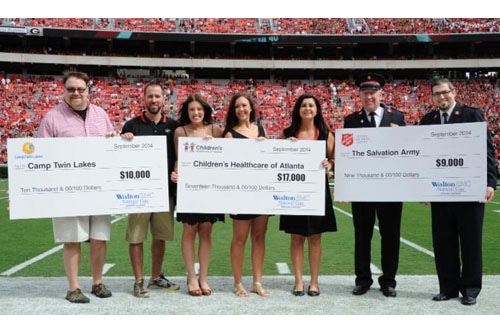 Last month, the Georgia Bulldogs defeated the Tennessee Vols. The Bulldogs were not the only victors in this football game. A few Georgia charities also won big thanks to $36,000 in donations made by Walton EMC Natural Gas. Children’s Healthcare of Atlanta received $17,000, Camp Twin Lakes received $10,000 and $9,000 went to The Salvation Army. These donations were funded by Walton’s 2013 Kickin’ It for Charity and Big Gift campaigns.

In this year’s Kickin’ It For Charity campaign, Walton EMC Natural Gas will continue to donate $500 towards these three charities every time the Bulldogs scores a field goal. At the end of the season, the money is divided between the organizations based on the number of votes cast. Take part in the Kickin’ It for Charity campaign by voting for your favorite charity.

Walton EMC is also simultaneously running the Big Gift campaign. All new customers who sign up for natural gas services will be able to choose between a $25 bill credit or a $50 donation to their choice of the three charities.

“At Walton Natural Gas, we are focused on giving back. The Big Gift campaign demonstrates just how generous our customers can be,” said Savannah Chandler, Walton EMC Natural Gas communications representative. “We hope to have even larger checks for the charities next year.”