What Any Georgian Should Know About Waffle House 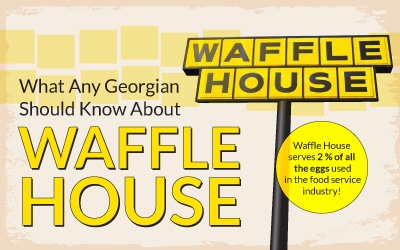 Here in Georgia, finding someone who’s never eaten at a Waffle House is about as common as a snowflake in July. The 24/7/365 diner chain that got its start — and is still headquartered — here is a beloved Peach State institution.

The iconic yellow-and-black Waffle House signs have been a beacon for the hungry since its first location opened in Avondale Estates north of Atlanta on Labor Day 1955. But there’s more to the chain than just bacon, eggs and smothered-and-covered hash browns. For instance, did you know many Georgia WaHos, as they are affectionately nicknamed, are Walton Gas customers just like you?

Here are eight more noteworthy tidbits about the chain that turns 66 later this year: